Tools that are bypassing Routers, and how to counteract them

A few weeks ago we learned that a piece of sophisticated malware called VPNFilter infected more than 500,000 routers and other devices around the world. VPNFilter was spotted in some 54 countries, but an increase in activity in Ukraine suggested the malware was created by Russian intelligence looking to disrupt Ukraine either ahead of the Champions League final in late May, or before local celebrations in late June.

The Kremlin denied any involvement in VPNFilter, of course. Since then, the FBI issued a warning to Internet users to restart their routers. Cisco’s Talos security team is now back with more details on VPNFilter which reveal the malware is even more dangerous and scary than we thought.

VPNFilter targets even more devices than it was first reported including models from ASUS, D-Link, Huawei, Ubiquiti, UPVEL, and ZTE, as well as new models from manufacturers that were already targeted including Linksys, MikroTik, Netgear, and TP-Link. Up to 200,000 additional routers around the world are at risk of being infected.

Cisco discovered that the malware could perform man-in-the-middle attacks. That means the malware can inject malicious content in traffic that passes through the infected router and its targets.

Similarly, it can steal login credentials that are being transmitted between a computer and a website. The usernames and passwords can be copied and sent to servers controlled by the hackers. How is that even possible? VPNFilter downgrades HTTPS connections to HTTP, which means the malware is essentially looking to bypass encryption.

Cisco thinks that the VPNFilter threat is bigger than initially believed.

“Initially when we saw this we thought it was primarily made for offensive capabilities like routing attacks around the Internet,” Talos’ Craig Williams told Ars Technica. “But it appears [attackers] have completely evolved past that, and now not only does it allow them to do that, but they can manipulate everything going through the compromised device. They can modify your bank account balance so that it looks normal while at the same time they’re siphoning off money and potentially PGP keys and things like that. They can manipulate everything going in and out of the device.”

The attacks appear to be incredibly targeted, as the hackers are looking for specific things. “They’re looking for very specific things,” Williams said. “They’re not trying to gather as much traffic as they can. They’re after certain very small things like credentials and passwords. We don’t have a lot of intel on that other than it seems incredibly targeted and incredibly sophisticated. We’re still trying to figure out who they were using that on.”

But wait, there’s more. The malware can also download a self-destroy module that wipes the device clean and reboots the device.

Getting rid of VPNFilter isn’t an easy task. The malware is constructed in such a way that a Stage 1 attack acts as a backdoor on devices that can be infected, and is used to download additional payloads, Stages 2 and 3, which bring over the more sophisticated features, including man-in-the-middle-attacks and self-destruction.

All routers owners should assume from the start that their device has been infected, and perform a factory reset, Arssays, followed by a software update that could remove the device’s vulnerabilities to Stage 1 infection. Changing default passwords is also advised, as is disabling remote administration. Rebooting the device like the FBI asked might not be enough, however.

Below is how we beleive this exploit works.

Security researchers have released new tools that can bypass the encryption used to protect many types of wireless routers. Ironically, the tools take advantage of design flaws in a technology pushed by the wireless industry that was intended to make the security features of modern routers easier to use.

At issue is a technology called “Wi-Fi Protected Setup” (WPS) that ships with many routers marketed to consumers and small businesses. According to the Wi-Fi Alliance, an industry group, WPS is “designed to ease the task of setting up and configuring security on wireless local area networks. WPS enables typical users who possess little understanding of traditional Wi-Fi configuration and security settings to automatically configure new wireless networks, add new devices and enable security.”

Setting up a home wireless network to use encryption traditionally involved navigating a confusing array of Web-based menus, selecting from a jumble of geeky-sounding and ill-explained encryption options (WEP, WPA, WPA2, TKIP, AES), and then repeating many of those procedures on the various wireless devices the user wants to connect to the network. To make matters worse, many wireless routers come with little or no instructions on how to set up encryption.

Enter WPS. Wireless routers with WPS built-in ship with a personal identification number (PIN – usually 8 digits) printed on them. Using WPS, the user can enable strong encryption for the wireless network simply by pushing a button on the router and then entering the PIN in a network setup wizard designed to interact with the router.

But according to new research, routers with WPS are vulnerable to a very basic hacking technique: The brute-force attack. Put simply, an attacker can try thousands of combinations in rapid succession until he happens on the correct 8-digit PIN that allows authentication to the device.

One way to protect against such automated attacks is to disallow authentication for a specified amount of time after a certain number of unsuccessful attempts. Stefan Viehböck, a freelance information security researcher, said some wireless access point makers implemented such an approach. The problem, he said, is that most of the vendors did so in ways that make brute-force attacks slower, but still feasible.

Earlier today, Viehböck released on his site a free tool that he said can be used to duplicate his research and findings, detailed in this paper (PDF). He said his tool took about four hours to test all possible combinations on TP-Link and D-Link routers he examined, and less than 24 hours against a Netgear router.

“The Wi-Fi alliance members were clearly opting for usability” over security, Viehböck said in a instant message conversation with KrebsOnSecurity.com. “It is very unlikely that nobody noticed that the way they designed the protocol makes a brute force attack easier than it ever should.”

Separately, Craig Heffner, a researcher with Columbia, Md. based security consultancy Tactical Network Solutions, has released an open-source tool called “Reaver” to attack the same vulnerability. Heffner notes that once an attacker has successfully guessed the WPS PIN, he can instantly recover the router’s encryption passphrase, even if the owner changes the passphrase. In addition, he warns, “access points with multiple radios (2.4/5GHz) can be configured with multiple WPA keys. Since the radios use the same WPS pin, knowledge of the pin allows an attacker to recover all WPA keys.” 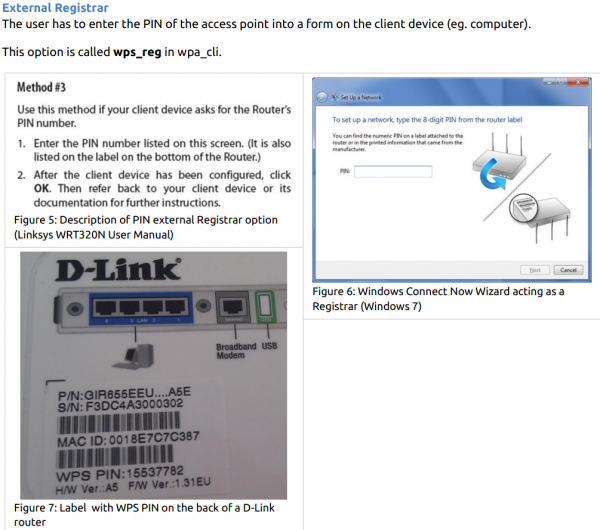 The important thing to keep in mind with this flaw is that devices with WPS built-in are vulnerable whether or not users take advantage of the WPS capability in setting up their router. Also, routers that include WPS functionality are likely to have this feature turned on by default.

First the good news: Blocking this attack may be as simple as disabling the WPS feature on your router. The bad news is that it may not be possible in all cases to do this.

In an advisory released on Dec. 27, the U.S. Computer Emergency Readiness Team(US-CERT) warned that “an attacker within range of the wireless access point may be able to brute force the WPS PIN and retrieve the password for the wireless network, change the configuration of the access point, or cause a denial of service.” The advisory notes that products made by a number of vendors are impacted, including Belkin, Buffalo, D-Link, Linksys, Netgear, TP-Link and ZyXel.

Viehböck said none of the router makers appear to have issued firmware updates to address the vulnerability. The US-CERT advisory makes no mention of updates from hardware vendors. The advisory also says little about which models may be affected, but if your router has a “WPS PIN” notation on its backside, then it shipped with this WPS feature built-in.